Another form of art that was common throughout Upper Paleolithic Europe was  that of "sculpture" figures of shapely women, known colloquially as "Venus figurines." These figures are particularly interesting because of their widespread occurrence throughout Europe starting from the Gravettian period (28,000-23,000 years ago) onwards. Subtle differences in shape and design are interpreted by many scholars as firm evidence for different "cultures" living in Europe during this time. But on the whole, the amount of similarity among the figures is striking. They almost universally depict obese-looking females with non-distinct facial features and reduced extremities. Secondary sex features like the buttocks, breasts, and genitalia are heavily emphasized in the Venus figurines. Many of the figurines are also adorned with what appears to be early forms of clothing made mostly of fibers and cords. Soffer and her colleagues recently proposed that this depiction of textiles  on the women's bodies may be indicative of differences in roles between the sexes during the Upper Paleolithic. 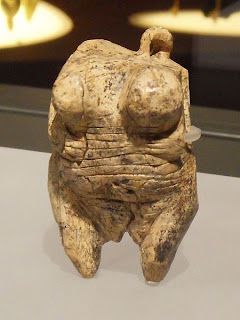 The Venus of Hohle Fels

The earliest undisputed example of a Venus figurine was found at Hohle Fels, Germany. This particular sculpture dates to around 35,000 years ago, placing it firmly in the Aurignacian period, which predates the Gravettian period, where we see these types of representations of the female become increasingly common. This discovery was significant because other examples of art that pre-dates this 35,000 year-old finding depict only animals, hunting scenes, and related activities, but never women. 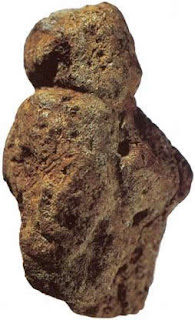 Recently, however, some have suggested giving the title of "earliest Venus figurine" to two other carved figures from Morocco (The Venus of Tan-Tan) and Syria (The Venus of Berekhat Ram). These date from 200,000-300,000 years ago, however, and the claim is highly contested. These humanoid figures could easily have been produced as the result of erosion or other natural forces. 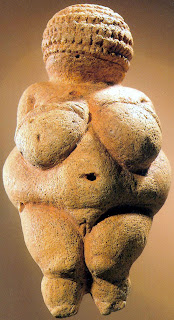 The Venus of Willendorf, another well-known example of a Venus figurine

These Venus figurines are found in the context of larger settlements. Very rarely are they found in burial sites, a clue which may reflect a purpose these figures served in everyday life. Many different interpretations have been posited relating to the purpose of these objects, which clearly had a symbolic meaning to Upper Paleolithic peoples. Some scholars believe these female figures represented generic fertility idols, others view them as indicators of social networks, and still others interpret the carvings as an early form of pornography.